The Kontroversial Kinks, one of the forerunners of the English Invasion, and one of the longest lasting bans to emerge.

The Kinks were part of the original English Invasion, following The Beatles, the Rolling Stones and The Who in the first wave. The line-up then was the two Davies brothers, Dave and Ray, plus Mick Avory on the drums, and Peter Quaife on bass Formed in December 1963, (but they had been doing the rounds with other bands since ’62) as The Ramrods then The Ravens. Sometime in 1962, they were playing gigs as back up singer to a singer named Robert Wallace. Robert gave up singing and started managing the band. 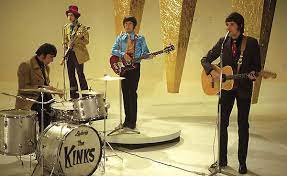 Soon, Larry Page spotted them, changed their name to The Kinks, and introduced the red hunting jackets and signed them to Pye records.

After a couple of singles ignored by the record buyers, the hit with the classic” You Really Got Me”, produced by Shel Talmy, which made the No. 1 spot in August 1964.

Next “All Day and All of the Night” released in November of that year, reaching No. 2. A similar gutsy guitar riff with strong vocals.

The band became notorious for on stage fights between the brothers Davies. Ironically, the Davies Brothers became the only consistent members through the bands 35-year career. They were banned in Denmark after an audience riot at the Tivoli Gardens.

1965 saw the Kinks in the Top 20 5 times, best performers being “Tired of Waiting for You”, in January reaching No. 1, and the rocking “Till the End of The Day” getting to number 9, in December. 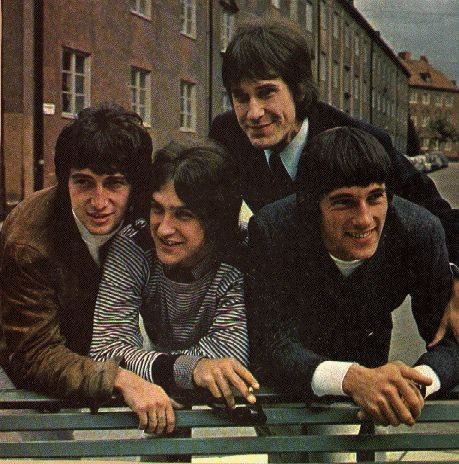 This led to the “Village Green Preservation Society”, “Arthur, or The Decline and Fall of the British Empire”, and of course, “Lola vs Powerman and the Moneygoround Pt 1, from which came the bands anthem, “Lola”.

This resulted in “Dedicated Follower of Fashion”,(Number 4 UK Feb 66) having a dig at the trendy London trendies, and “Sunday Afternoon”  (No.1 June 66) a swipe at the upper classes.

Things went quiet for the Kinks then, Dave did his own thing with “Death of a Clown”, and Ray was not getting on with Pye Records. Pye were only interested in hit singles, Dave wanted to get into albums and quality music.

John Doulton took over the bass in March 1969, and in May,1970 John Gosling was added on keyboard.

I cught the Kinks in Adelaide, 1965, complete in hunting jackets, where they played on the same bill as The Honeycombs, Tony Shevaton and top of the bill Manfred Mann.

The Kinks have had five Top 10 singles on the US Billboard chart. Nine of their albums charted in the Top 40 In the UK, they have had seventeen Top 20 singles and five Top 10 albums. Four Kinks albums have been certified gold by the RIAA and the band have sold 50 million records worldwide. Among numerous honours, they received the Ivor Novello Award for "Outstanding Service to British Music". In 1990, the original four members of the Kinks were inducted into the Rock and Roll Hall of Fame as well as the UK Music Hall of Fame in November 2005. In 2018, after years of ruling out a reunion due to the brothers' animosity and the difficult relationship between long time drummer Mick Avory and Dave, Ray and Dave Davies finally announced they were working to reform the Kinks, with Avory also on board. However, comments made by each of the Davies brothers in 2020 and 2021 would indicate that in the years since the initial announcement, little (if any) progress has been made towards an actual Kinks reunion for a new studio band album.