The Hollies proved themselves to be one of the most popular bands from the British Invasion Era. 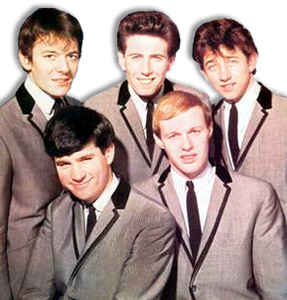 The Hollies have proven over many years to be one of the most consistently popular and long-lasting groups from the beat era. First signed by EMI in the post Merseyside search for more Beatles, bands, the Hollies continue to perform to this day. They got there name from Buddy Holly, as the Beatles got there’s from the “Crickets”.

“Just One Look” really broke the band a cover of Doris Troy got them to No. 2, was a No. 4 hit, and finally “I’m Alive" with Graham Nash on vocals reaching No. 2, just behind the Beatles.

The Hollies had arrived. 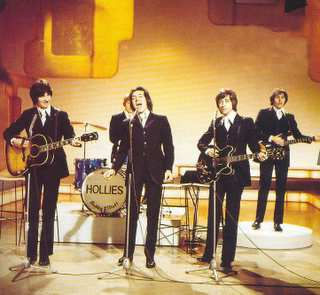 New line up, 1975, with Terry Sylvester, far left on guitar, and Bern Calvert, right, on bass

From there, until the present day, through line up changes and changing music styles the Hollies have persistently come up with high quality music.

Swedish singer Mikael Rickfors sang  “The Baby” when Alllan Clark left for a while, but came back with the smash No. 2 in the USA “Long Cool Woman in a Black Dress” in 1972, followed by the classic “The Air That I Breath” , No. 2 in U.K. and No. 6 in the U.S.A.

Vinyl Records by The Hollies. 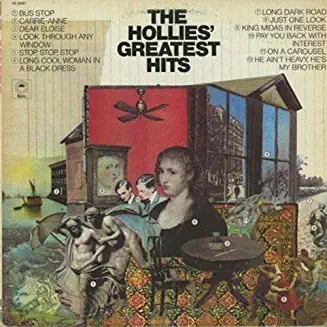 There does not seem to be a lot of Hollies around on vinyl. However, there is enough to get a good selection into your collection. A good one to start with is this Greatest Hits album, put out by Epic in 1973. It's a good collection of the discs that were a hit in the U.S. between '65 and '72, so it will give you some great listening. Included is "Carrie Anne" "Bus Stop" "Long Cool Woman" (a must) and of course "He Ain't Heavy" . 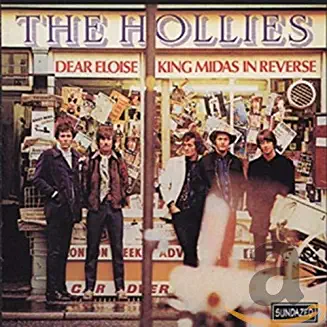 This album was recorded at Abby Road Studios in late 1967, and released in November that year as "Butterfly". The 7th Hollies studio album, their second  for 1976, and the last to feature Graham Nash. None of the tracks were released as singles and all tracks were written by Clarke-Nash-Hicks, with Nash doing most of the vocals.

The U.S. version of Butterfly, the album featured a different cover, and was re-named "Dear Eloise/King Midas in Reverse. It came out on Epic records in November '67.

Recorded at Abby Road Studios in late 1967, and released in November that year. The 7th Hollies studio album, their second  for 1976, and the last to feature Graham Nash. None of the tracks were released as singles and all tracks were written by Clarke-Nash-Hicks, with Nash doing most of the vocals. 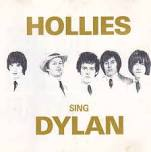 The controversial 8th Hollies album 'Hollies Sing Dylan" was recorded in May 1969. The album resulted in Graham Nash leaving the band. Graham had written some songs he wanted to do for the next album, but the band were not interested. And he was not interested in doing Dylan songs, considering in "sacrilege"

However, the album was a success, and it introduced Nash's replacement terry Sylvester. 12 Tracks with "I'll Be Your Baby Tonight", "Blowin' In The Wind", a rollicking "Mighty Quinn" and 'This Wheels On Fire". 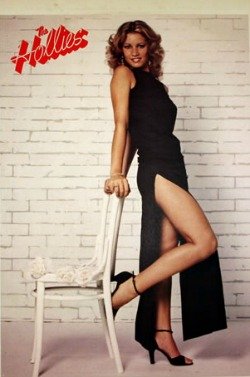 One of the Hollies best releases, coming out in April 1972. Written by Allan Clarke with Roger Cook, and Roger Greenaway. I reached No. 32 on the charts in the U.K., and No. 2 in the USA.