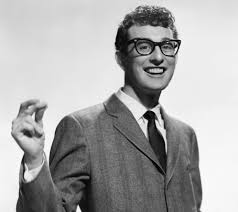 Buddy Holly had a great influence on Michael Jackson, The Beatles, The Hollies and many, many others!

Buddy Holly was born Charles Hardin Holley (September 7, 1936 – February 3, 1959).  He was a richly talented and distinctive central and pioneering figure of mid-1950's rock and roll. Buddy  took a keen interest in production techniques so his music of 30 years ago sound as fresh and vibrant. He was born in Lubbock, Texas, to a musical family during the Great Depression, and learned to play guitar and sing alongside his siblings. His style was influenced by gospel music, country music, and rhythm and blues acts, which he performed in Lubbock with his friends from high school.

He made his first appearance on local television in 1952, and the following year he formed the group "Buddy and Bob" with his friend Bob Montgomery. In 1955, after opening for Elvis Presley, he decided to pursue a career in music. He opened for Presley three times that year; his band's style shifted from country and western to entirely rock and roll. In October that year, when he opened for Bill Haley & His Comets, he was spotted by Nashville scout Eddie Crandall, who helped him get a contract with Decca Records. 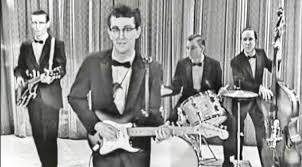 It Becomes Buddy Holly and
The Crickets

Original line up was Jerry Allison on drums, Sony Curtis on guitar and Don Guess on bass.

The album Chirping Crickets, released in November 1957, reached number five on the UK Albums Chart. Holly made his second appearance on The Ed Sullivan Show in January 1958 and soon after, toured Australia and then the UK. In early 1959, he assembled a new band, consisting of future country music star Waylon Jennings (bass who narrowly missed being on the fatal flight), famed session musician Tommy Allsup (guitar), and Carl Bunch (drums), and embarked on a tour of the midwestern U.S. After a show in Clear Lake, Iowa, he chartered an airplane to travel to his next show, in Moorhead, Minnesota. Soon after take-off, the plane crashed, killing Holly, Ritchie Valens, The Big Bopper, and pilot Roger Peterson in a tragedy later referred to by Don McLean as "The Day the Music Died" in his song "American Pie".

During his short career, Holly wrote and recorded many  songs. He is often regarded as the artist who defined the traditional rock-and-roll line-up of two guitars, bass, and drums. He was a major influence on later pop music. Michael Jackson adopted his hiccup style in many of his songs. The Hollies named themselves after him, and The Beatles chose that name for being as close as they could get to The Crickets. They were loved his lead guitar technique of playing lead with chords, as in “Peggy Sue”

John and Paul saw him on TV just after the two had met, and learned his performance style and lyricism, and based their act around his persona. Bobby Vee started his career as a result of Buddy’s death, he went on to continue the tour dates booked.

Listen to “Rubber Ball” and you will notice the influence.