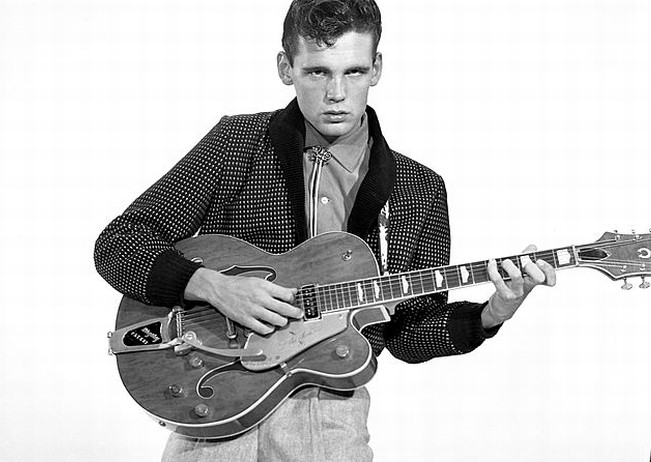 The Guitarist Who Taught Us The Twang Was The Thang!

Duane Eddy, one of our very first pop idols, came from Corning , New York and moved to Phoenix at age 17, already a seasoned guitar player. There he teamed up with guitarist Al Casey, (Born Long Beach California) and DJ/Promoter Lee Hazelwood, later influential with Nancy Sinatra. These two came up with the “Twangy Guitar” idea, which appealed to Duane immediately. 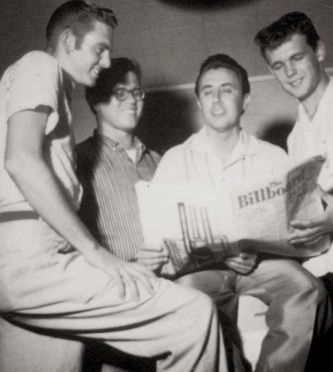 The first record from this team was a moderate hit, Moovin’ and Groovin’ in early 1958. The opening riff of this tune was borrowed from the  Chuck berry riff in “Brown Eyed Handsome Man”. This was later used as the opening riff to the Beachboys song “Surfin’ USA”

It Becomes Duane Eddy and the  The Rebels

The second single was “Rebel Rouser, coming out in late 1958. Featuring rhythmic repeated guitar riffs, sax by Gil Banal, plus enthusiastic rebel yells, handclaps by The Rimingtons, the record hit No.^ on the Billboard Hot 100, No. 7 on Cashbox, and broke into the U.K. chards at No. 19.

This hit earned him his first Gold Record.

The Rebel Rousers were made up of Al Casey on guitar, Steve Douglas on Sax, Larry Knetchell on keyboard (later in the band Bread), and worked with Phil Spectors Wrecking Crew. Then followed a succession of classic hits. Song like “40 Miles of Bad Road”, “Shazam” (later covered by the Shadows) “Some Kinda Earthquake” (with the whole guitar riff played in chords, bit like a Buddy Holly lead) and the one us kids in Adelaide played to death…”Peter Gunn”

I first heard this at mu mates place in blackwood, where he lived. He was already a committed Duane Eddy fan, had all his records , where I just had “Bye Bye Birdie” and Frankie Laine’s “Hell Bent For Leather” LP’s.

The bit in Peter Gunn where all the instruments stopped, then came in one by one, we would play over and over again!Duane Eddy continues to perform to this day. n October 2010, Eddy returned to the UK at a sold-out Royal Festival Hall in London. This success prompted the subsequent album for Mad Monkey/EMI, which was produced by Richard Hawley in Sheffield, England. The album, Road Trip, was released on June. Mojo placed the album at number 37 on its list of "Top 50 albums of 2011." Eddy performed at the Glastonbury Festival on June 26, 2011. For an 80th-birthday tour in 2018, Eddy returned to the UK in concerts with Liverpudlian singer-songwriter Robert Vincent, performing on October 23 at the London Palladium, and October 30 at Bridgewater Hall in Manchester. Duane Eddy records to help keep the raunchy spirit of rock and roll alive, during a time in which it was in danger of being watered down.

He has influenced many, many a guitar player over the years and continues to do so today.

Some Of Duane Eddy’s numerous awards include ......

Number One World Musical Personality in the NME Poll (UK: 1960)

Not bad for a Twangy Guitarist!

The Twangs The Thang 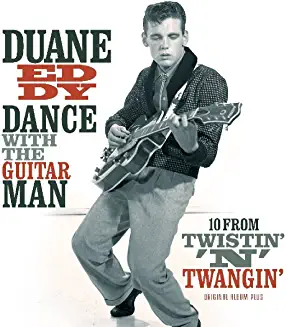 Dance With The Guitar Man

his album, released in September 1963 was done at RCA Victor, when Duane switched over from Jamie Records. It featured the single of the same name, the nice "Wild Watusi", "Nashville Stomp", (it was recorded in Nashville", 12 tracks in all.

Dance With The Guitar Man