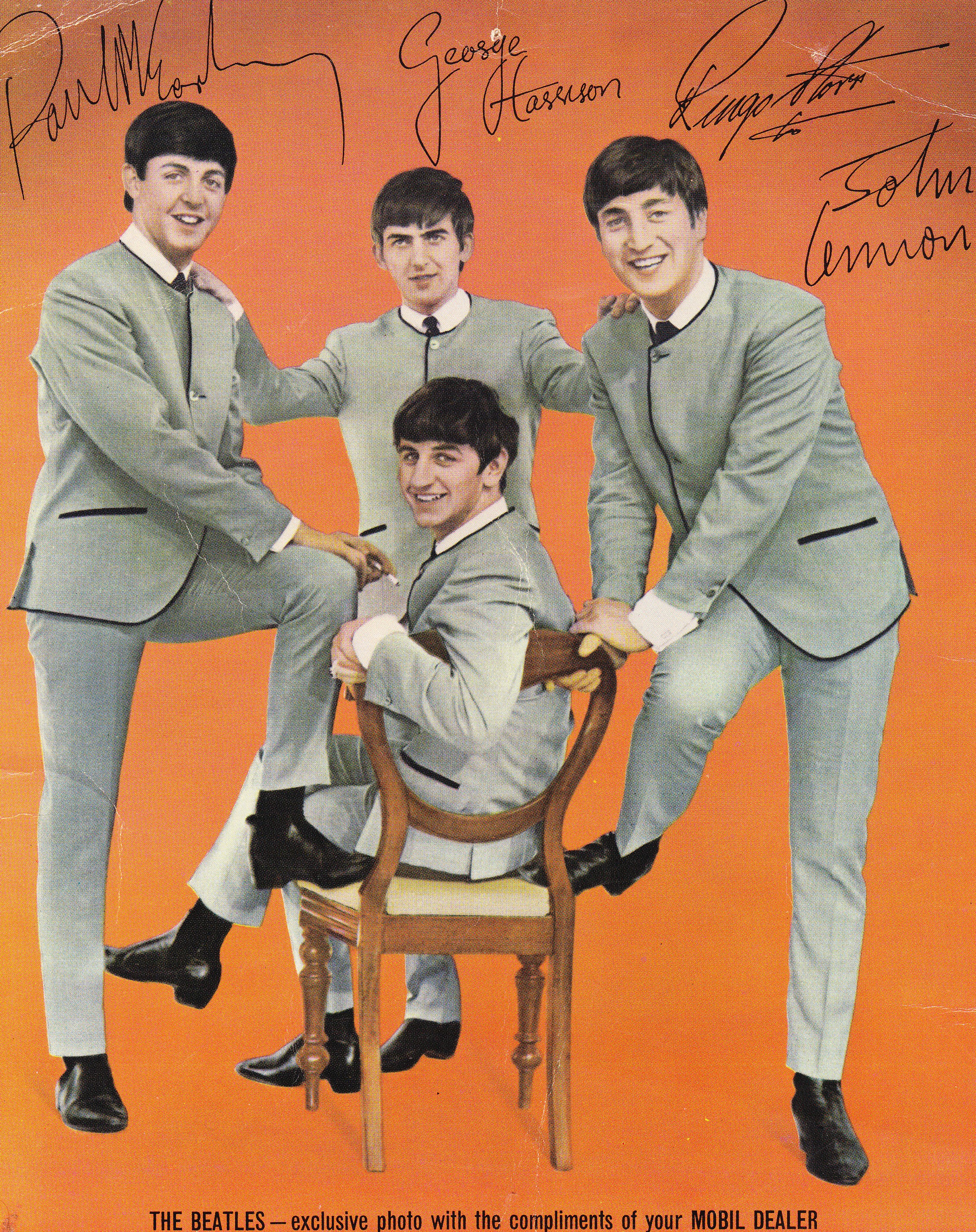 Next to Beatles records, Beatles posters were a collectors item in. This is one handed out by the Mobil petrol Company.

How The Beatles Stopped the City

Beatles records had become must possessions by the time The Beatles hit Adelaide , South Australia, and stopped the city .

Anyone who was supposedly into music HAD to have  at least three Beatles albums, if not all of them. People lined the streets from the airport to the Adelaide Town Hall, when the band arrived in Adelaide just to get a glimpse of the Fab Four. I heard the yells of the crowd from inside the building where I worked as they drove past.

At lunch time, down I rushed to the town hall,( with a couple of thousand others) just in time to see them on the balcony there. I fought through the crowd, all waving Beatles pictures, Beatles records and other paraphernalia. I also worked at a petrol station at weekends, and we handed out the above picture to everyone who bought petrol that week,

Yes, in Adelaide South Australia, the Beatles made it to the petrol dealers.

Beatle records ...now a must have item!

That was when I realized how lucky we were to be living in such exciting times. There was a real feeling that things were changing, musically and socially. What a time! Everyone from Adelaide to Arkansas were yelling "Yeah Yeah Yeah!" and music was uniting the kids.

A music of our own!

Beatles records were a hot item, I collected ever one of them, as soon as they came out .It was through a Scottish friend of my mothers that I first heard of the Beatles. I had not heard their music, just heard this friend telling my mother they were the in thing in the U.K.

The main discussion at school was based on how many Beatles records one had, and which was your favourite.

I thought, "Beatles"? What kind of name is that? A band needs a swinging name like "Shadows", or "Tornadoes". Cant make it with a name like that! But then I heard "Twist And Shout" and that was it! Needless to say, (along with my prediction about the Bee Gees) I was a little out with my guess.

A few months later, their I was, in a street here in Adelaide, at 5.30 in the morning lining up with a squillion others, waiting to buy my Beatle tickets. It took a few hours to get to the ticket seller, there was a limit of 6 per person. I bought 6, and went home, 11.30ish, clutching my cherished tickets.

Then to school, with a note in my school diary explaining I was absent "for an important meeting". My teacher looked at the diary, looked at me, and asked "...to get tickets?"  What could I say? "Yes Sir" i said expecting to be kept in after school. He smiled, and just handed the diary back.

It was worth the effort. It really changed my outlook on music, and just could not get over how good they were. Just as I had seen countless of times on TV, the shaking of the heads, three around the mike, at the guitar solo’s, John and Paul backing back from the mikes with George strolling to the front, then John and Paul getting back to the mikes right on cue.

Amazing! I had of course been out and purchased the first couple of Beatle records, so knew there songs. And there were plenty of Beatle record covers being waved around during the show,

How The Beatles Got  To Be So Good! 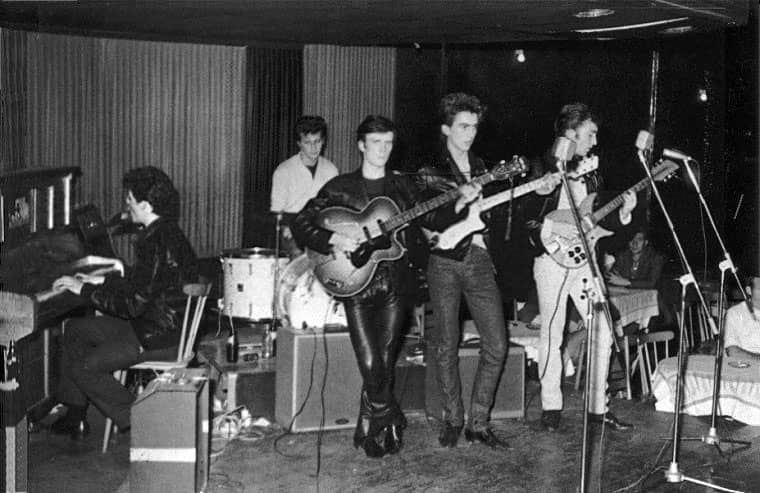 Although The Beatles were a Liverpool band through and through, their music was steeped in the Southern states of America, and honed to perfection on the stages of Hamburg

John formed "The Black Jacks" in 1957, later changing the name to "The Quarrymen" after the school they all attended. Paul joined that July, and George in January 1960, auditioning for John and Paul on the local bus on the way home. Stu Sutcliffe won some money in an art competition, and John persuaded him to buy a bass guitar and join the band, despite him not being able to play a note.

Pete Best joined on drums, as his mother owned the Casbah Club, where thy began to play. The name changed between the Beetles, Silver Beetles, and finally The Beatles.

Hamburg was where The Beatles, and many other bands, including The Searchers, Rory Storm and The Hurricanes (where The Beatles met Ringo) and The Big Three really got going. They played The Indra from 17 August to the 30 October, then the Kaiserkellar till the 30 November 1960. Here the Beatles developed their  tight stage presentation. And here, the first of the many Beatles records was put down,  "My Bonnie", featuring Tony Sheridan on vocals.

On returning to the U.K. and playing their first show at the Litherland ballroom on 27th December, the crowd did not know what hit them. It's also where Paul bought his famous Hofner violin bass, choosing it because he could not afford a Fender precision bass. 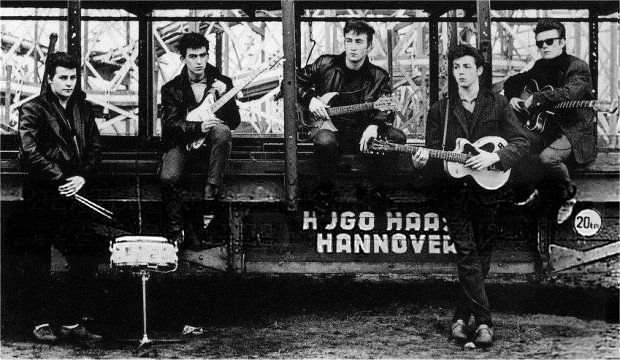 In Australia, we got  Beatles records pretty much as they were released in the U.K. But, as was often the case with other bands vinyl records, we had a different cover. We frequently missed out on the fold out cover, as with"Sgt Peppers", and "Beatles for Sale" Balbums.

Luckily, there are still Beatles records on vinyl available! 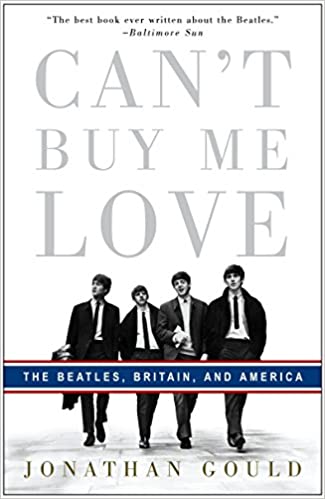 In Can't Buy Me Love, Jonathan Gould explains why, placing the Fab Four in the broad and tumultuous panorama of their time and place, rooting their story in the social context that girded both their rise and their demise. Nearly twenty years in the making, Can't Buy Me Love is a masterful work of group biography, cultural history, and musical criticism.

Beginning with their adolescence in Liverpool, Gould describes the seminal influences--from Elvis Presley and Chuck Berry to The Goon Show and Alice's Adventures in Wonderland--that shaped the Beatles both as individuals and as a group. In addition to chronicling their growth as singers, songwriters, and instrumentalists, he highlights the advances in recording technology that made their sound both possible and unique, as well as the developments in television and radio that lent an explosive force to their popular success. With a musician's ear, Gould sensitively evokes the timeless appeal of the Lennon-McCartney collaboration and their emergence as one of the most creative and significant songwriting teams in history.